Cruelty to animals has serious repercussion

Research shows that cruelty to animals often transmogrifies into criminal misdeeds and adds to a city’s list of crimes. The new Commissioner of Delhi Police would do well to crack down on those who treat animals without compassion.

The new Commissioner of Delhi Police, Mr BK Gupta, doubtless has a host of problems on his plate, including coping with terrorism and keeping the crime rate down when sociological, cultural and economic factors combine with the national capital’s peculiar location to push it upward. Nevertheless, an area which requires urgent attention is cruelty to animals.

Though the Delhi Police has been somewhat sensitised in the matter over the last few years, much still remains to be done. It continues to show a tendency not to take complaints of cruelty to animals seriously. In a recent instance in Mukherjee Nagar, north Delhi, an FIR against people accused of brutally beating a stray dog to death was reportedly registered only after intervention by those who matter. 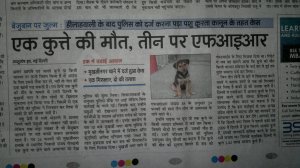 The tendency towards ‘burking’ (doctoring of crime figures through non-registration of FIRs or recording offences as less severe), which policemen display everywhere, is more evident in the case of animals.

The need for a change in the police’s approach to complaints of cruelty to animals is urgent because animals have right to live safely and happily and human beings, the most advanced and evolved of all living species, have a responsibility to ensure that they do so. It is also important because instances of people going scot free after violations of the Prevention of Cruelty to Animals Act of 1960, increases the tendency toward taking laws in general lightly, which is increasingly in evidence today. Equally significant, cruelty toward animals is indicative of aggression or latent or active criminality in a person and identification of such an individual and keeping him or her under surveillance is important for any police force.

Violent criminals tend to be cruel to both humans and animals. In their paper, ‘From Animal Cruelty to Serial Murder: Applying the Graduation Hypothesis’ (The International Journal of Offender Therapy and Comparative Criminology), Jeremy Wright and Christopher Hensley write that since the late-1970s, the FBI has considered animal cruelty as a possible indicator of future serial murder.

“The FBI documented the connection between cruelty to animals and serial murder following a study of 35 imprisoned serial murderers. The convicted murders were asked questions regarding their childhood cruelty toward animals. More than half of the serial murderers admitted to hurting or torturing animals as children or adolescents (Humane Society of the United States, 2001).”

They further point out that in 1987, animal cruelty was added to the Diagnostic and Statistical Manual of Mental Disorders-III (R) as a symptom of conduct disorder and was retained in the 1994 DSM-IV (American Psychiatric Association 1987, 1994). According to DSM-IIIR and DSM-IV description of conduct disorders, it commonly involves physical violence and harm to humans and animals.

In another paper entitled ‘Childhood Cruelty to Animals and Subsequent Cruelty to Humans’ (The International Journal of Offender Therapy and Comparative Criminology), Linda Merz-Perez, Kathleen M Heide, and Ira J Silverman write that cruelty to animals has long served as “a red flag in law enforcement circles with respect to extremely violent offenders” and state that “the expansive literature with respect to serial killers has often cited cruelty to animals as a precursor to the violence later targeted against human victims (Lockwood & Church, 1998)”.

They conclude that the study’s overall results support previous research efforts indicating “a relationship between cruelty to animals committed during childhood and later violence perpetrated against humans.”

Noting that the matter is complex, the authors say that cruelty to animals in children can provide insights into violent behaviour that may or may not translate later into violence against human beings and that cruelty to animals often reveal insightful analogies to violence against human beings. They cite the example of a “violent offender, a repeat sex offender” who had been “convicted of a crime against nature for sodomising a reformatory pig” and another, “convicted of sexual batter on a person 65 years or older”, described how he would throw stones at stray animals to “beat and hurt them as my parents hurt me”.

Prompt and effective action regarding offences affecting animals should, therefore, be considered a critical and integral part of policing. Mr BK Gupta would make a signal contribution to enhancing citizens’ security in Delhi if he can impress this on his force.

← Priya, Dog breeding and the Income Tax Department
In defense of the street dogs of Kashmir →

2 Comments on “Cruelty to animals has serious repercussion”