We learn much in life through our respective experiences, trials and errors and this article traces my experience while working with animal rescue groups on wildlife crime based investigative operations. We do understand that what I did was just one tiny drop in the ocean but atleast it was a single drop…and through this article we at ‘Jaagruti’ hope that many more of you who hope to crack the mystery behind nabbing wildlife criminals or the lack of it- will get a peep into the whole process and somewhere down the line be inspired to act to nab those who toy with our country’s much cherished natural heritage, thereby helping in minimising wildlife crime, which has the potential to wipe out India’s magnificent animals if left unchecked! 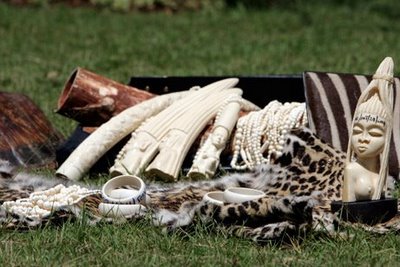 All species of animals and products derived there from that find mention under the Indian Wildlife Protection Act 1972 are considered to be protected under the legal system and the punishments for killing/possessing the same varies as per the degree of the crime committed and the schedule to which the animal belongs. And by law, all wild animals and products listed and protected under this act are considered a property of the Government of India and the responsibility to enforce this law rests entirely on the state wildlife departments (wildlife inspectors/forest officers). However, Section 50 of the Wildlife Protection Act, 1972, also empowers “a Police official of the rank of a Sub-Inspector or above has the powers to search, seize and arrest”.

It is important to note that while undertaking a raid to nab wildlife criminals, one requires the help of the Police and/or the Forest/Wildlife department for the power to search a spot seize the animals and arrest the accused lies with these government officials; representatives of the NGO circuit, individual activists or the common man don’t have legal powers to do so, but there exist a number of ways in which individuals/NGOs and the government machinery can assist each other to nab wildlife criminals by utilizing their respective skills/resources and legal powers respectively.

Kinds of Wildlife criminals (and Investigations):

There are three levels of wildlife criminals operating in the city. The lowest rung is that of the roadside vendors which include bird-sellers, dog-sellers, pet-shops, snake charmers, madaris etc. Nabbing the people involved in the lower rung helps in reaching the mid-level gang that includes the wholesale-dealers, who retail the animals to these local pheri-wallahs. Catching these wholesale dealers leads us to the source, which includes the traders who are involved in capturing these animals from their wild habitat and the knowledge of the areas from where the animals are being captured and an idea about their trade routes.

Broadly, wildlife crime investigations in our country can be categorized into the following-

How is an investigation and operation carried out?

The (apathy of) State Wildlife Departments, the Police and the legal lacunae:

These departments often do not work to their full potential and the reasons for these are manifold for they neither have the infrastructure, nor the staff or the spirit to do this kind of investigative work.

In Delhi, for example, there are 5 Wildlife Inspectors that joined this department about two decades back and in all these years, they haven’t even been promoted once! When they joined they were Wildlife Inspectors and they remain so even now. In all these years, there are no new recruitments that have taken place either. As a result, there is no one to work under them or work with and naturally so, over all these years these inspectors also tend to lose out on the youthful energy they carried when they first joined these departments, hence it is natural to assume that the officials lack spirit and enterprise and suffer from demonization and frustration.

Coupled with it, is rampant corruption, lack of political will and the complete lack of infrastructure. These wildlife inspectors move on motorbikes and don’t even have a car and a driver at their disposal thus making it difficult for them to move the rescued animals or even take the accused for a Medical examination before presenting him in front of the district court magistrate as per the provisions of the law.

Also, The Wildlife Department and the Police are not armed with a team of animal handlers so they are generally apprehensive of carrying out wildlife crime seizures. Despite knowing that showing snakes to people on roadsides or selling birds is illegal, the authorities fail to nab street entertainers using animals as the whole thought of handling snakes, monkeys, bears and mongooses (after conducting the seizure) scares them off!

The Wildlife Departments don’t have the space to house rescued animals till their release orders are issued by the court. Zoos are most unwilling as they are already starved of space and cash. Also, the Wildlife Departments don’t have lock ups to house the arrested accused before being presented to the court and thus they have to turn to the Police for lock-up assistance which adds to the headache of the police stations as they get thrusted with the responsibility of ensuring that the accused doesn’t suffer health wise or die in their police custody

As Rajeev Jain, an animal activist associated with the Delhi chapter of NGO People for Animals shares below; there are many hurdles that prop up at different stages of a wildlife crime combating operation, mostly because the police and judges are not sensitized to animal welfare or aware of the laws and seriousness of the crime. “The judges in the district courts normally take pity on the bird sellers or a snake charmer we catch hold of in a city because they consider them to be poor people and thus give them the most meager punishment and accept their bail plea very easily. Lives of animals are not considered precious enough”, lamented Rajeev.

Also the Police authorities and wildlife officers are found wanting especially when it comes to handling, identifying and rehabilitating the live animals seized and it is here that the NGOs pitch in with their expertise. For example: NGOs pitch in with their knowledge of handling, health, habitat and feeding habits of the animals rescued along with providing temporary shade and shelter to the rescued animals. Often, many rescued animals die in the police station before being presented to the courts as the police officials are not provided with any budget to administer first aid or purchase the adequate feed/feeding bowls to help the stressed animals.

But all is not lost, gradually with growing awareness levels, the authorities are being increasingly and regularly forced to cooperate and extend support to individual activists and NGOs to nab wildlife criminals and it is up to individuals like you to acquaint yourself with the laws and the modus-operandi mentioned above so that you can assist as well as request the cooperation of enforcement authorities to take wildlife crime seriously. Only when more people take these issues up, will the authorities be on tender hooks and the government will be compelled to carry out the infrastructural and procedural improvements required to make the wildlife departments more effective and efficient.

Lastly, what is NOT Right?

Nilesh Bhanage of PAWS shares below his valuable insight on where exactly lies the problem with those people/NGO activists who consider themselves to be over and above the law and become overnight wildlife activists who go on to break every rule in the book in sheer exuberance, enthusiasm or most commonly for the sake of greed of money and media attention!

Most of the wildlife crime investigations in India happens out of heart & not with minds/ideas, careful planning or tricks and therein lies the only problem. Any animal lover starts posing as wildlife activist and starts doing  raids is clearly wrong. They will not do work in a stepwise manner and risk getting into trouble and that is one of the reasons wildlife crime conviction rates in India are so low.When anyone conducts raids, they must provide photos, video CDs,  veterinary treatment certificates, proofs, panchnama of seized material from criminals and even use supporting laws (i.e. using kids for wildlife trade is also punishable under child labor laws, using wildlife items for medicines comes under Food & Drug administration Act etc), so there are multiple factors that are involved.For Example: One girl posing animal activist goes to someone’s house & just pick-up their pet parakeet & squirrel which was hand-raised by someone. Then this girl goes & releases these animals and birds, confiscated by her back into wild, then in our eyes that girl herself is criminal under Indian Wildlife protection Act 1972 because she has flaunted the following following norms:

Remember, if we want to help animals or our wildlife, it is important that we follow the rules, for our safety and also for the health of the animal.

← Abandoning one’s pet: Could there be a crime bigger than that?
How to act when your society RWA puts a bar on letting your pet dog use the building lift? →

5 Comments on “Wildlife Crime Investigations and the Legal system”

Dogs and other domesticated animals can't spread Corona Virus, even the World Health Organisation/WHO has confirmed this. . . So, ditch the non sensical news and rumours on this subject. . . Please help spread this word around and save pets from being abandoned for silly reasons. . . #againstpetabandonment #Animals #pets #covid_19
May 2020 be a beautiful year filled with good health, kindness and compassion for all living beings co-inhabiting Mother Earth. . . Love and light, Vasudha Mehta and Team JAAGRUTI . . #Love #LoveAnimals #respect #Animals #Environment #MotherEarth #Compassion #Kindness #2020 #Jaagruti
Catch them young! . . Last week, thanks to the initiative of the Principal of D.A.V Public School, RK Puram, Mrs. Sanjana Datta, we were invited to conduct an Awareness Workshop on 'Compassionate Citizenship' for students of Class 4th and 5th. . . Our objective while conducting such awareness workshops is to inculcate within these young students, who are at such an impressionable age, empathy and respect for all living beings and the resources, Mother Earth offers us. . . These kids, learnt how they could go about caring for animals on the street, in the wild, about being sensitive towards our lifestyle choices and the Environment we co-inhabit with all other species, in our day to day lives. . . One student, stood up at the end and asked me, "Mam, we will do all this but how will other understand it?", my answer was, "They will understand it through YOU. This wave of compassion will spread through all of you. That's how this works. That's how kindness spreads" . . If you want such workshops to be conducted in your School, kindly email us at contact@jaagruti.org or DM us. . . Love and light, Vasudha Mehta & Team JAAGRUTI . . #animals #awareness #workshop #careforanimals #CompassionateCitizenWorkshops #CompassionateCitizen #Jaagruti #WorkshopsbyJAAGRUTI #loveanimals #recycle #reducereuserecycle #Delhi #India
The truth about #Crackers. . Let's make this Diwali a safe, happy, cruelty free one for animals and birds, too. . . #firecrackers #fire #loveanimals
Say no to Crackers! . . Wishing you all a happy and prosperous Diwali. Make it a safe one for birds and animals. . . #Diwali #loveanimals
Wishing you all a happy, prosperous and cracker-free Diwali. . . . . #Diwali #respect #rescuedog